Martin Foroz (Mohammad Forouzani) was born on the 30th of December 1964 in Tehran, Iran. He holds BA and MA degrees in English Literature and a Ph.D. degree in TEFL. He has been working as assistant professor of English Language and Literature at the University of Nizwa, Oman, since 2014.In the past 19 years, he has been teaching and supervising theses in both fields, but his literary and philosophical bends formed his poetic sense much earlier- at the beginning of secondary school. He insatiably read Persian Literature (his first language) and wrote poems and pieces of prose since he was in high school. His first collection of Persian poems under the title Khaste-tar az zaman (More Tired Than Time) was published in 1997 when he was a Lecturer of English.

My short story “A Room for a Decent Burial of Memories” is now available in 34MAG issue 80. Special thanks to the editor of 34th

The Confessing Song of Mr. Head This Verse Drama is one of the longest poems in my third collection of poetry “A Louvre of Verse”

A Louver of Verse: My third collection of poems with a look at the classics of American and British poetry. Thanks to Barry Beckham, Beckham

Available on Amazon and other sites from July 1st.

Available on Amazon and other sites from July 1st.

Find out what Goodreads reviewers think about “An Illustrative Dictionary of Semantics (ILLUDS)” in this short video.

TO the States or any one of them, or any city of the States,       Resist much, obey little, Once unquestioning obedience, once fully enslaved, 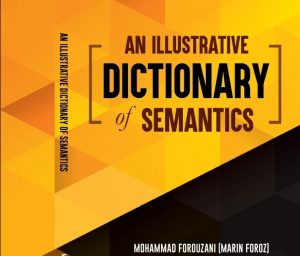 With the hope that Racism will soon be abolished-   (A Little Disturbance)   On the undulating deck of ship— the ship named Life, I